The tour guide at this site showed the picture at the top of this post that was taken around 1900. This place was first identified in 1849.

If you look closely at the picture, you can see that it resembles a skull. And that fact would fit the biblical record of where Jesus was crucified.

John 19:16-17 “So he delivered him over to them to be crucified. So they took Jesus, and he went out, bearing his own cross, to the place called The Place of a Skull, which in Aramaic is called Golgotha.”

But this place looks very different now. The part of the rock that created the impression of a nose has fallen off. But it has also been marginalized by the Jerusalem bus depot and humanity’s propensity to litter.

Here are some pictures and videos that I captured. 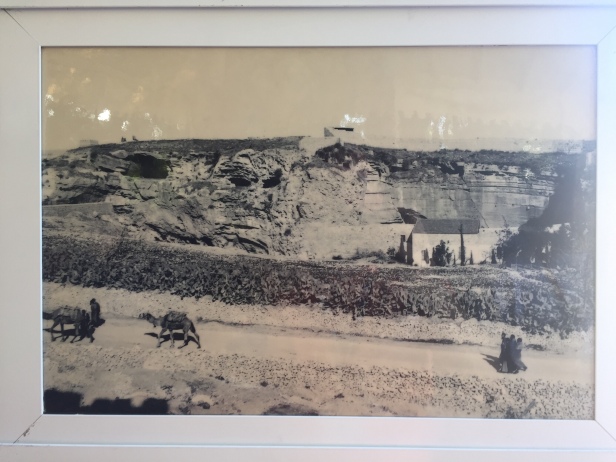 I don’t know about you but when I saw how the site had essentially been desecrated, I was saddened and angered.

However, a thought came to mind when I was experiencing those emotions. It was that this site was never intended to warm the human heart. It was a site of injustice, God’s wrath, payment for sin, and death. Mary and John, who attended the crucifixion, had their hearts ripped out in this location. It only makes sense that if this is truly the site where Jesus was crucified that His followers, while looking at what has been done to this location, would also feel angered and saddened, too.

I will elaborate on the second thought that came to mind after my following account of the Garden Tomb.

From the Scriptural account, the place where Jesus was buried was reasonably close to the place He was crucified.

John 19:40–42 “So they took the body of Jesus and bound it in linen cloths with the spices, as is the burial custom of the Jews. Now in the place where he was crucified there was a garden, and in the garden a new tomb in which no one had yet been laid. So because of the Jewish day of Preparation, since the tomb was close at hand, they laid Jesus there.”

After visiting the site at which many people think Jesus was crucified, we went to one of the potential locations of Jesus’ Tomb. It was within a very short walking distance of the rock formation I showed above.

Here are some pictures that I took: 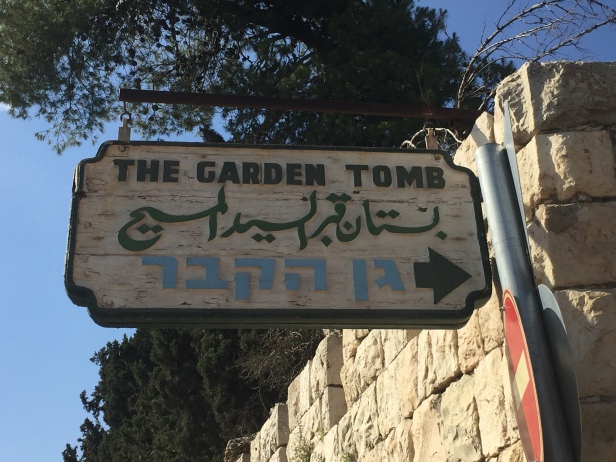 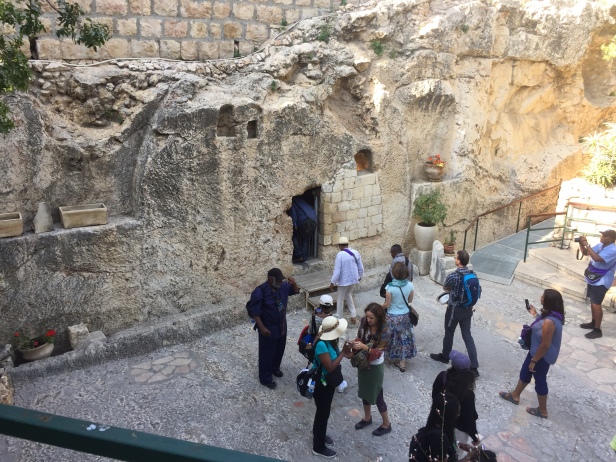 There is credible evidence that another site may be the spot that Jesus’ body lay for three days. We just don’t know for sure.

And that brings me to my concluding thoughts…

One of the propensities of human nature is to take something good, begin to idolize it, and thus make it bad. Let me give you a couple of biblical example.

Remember when God told Moses to make a bronze serpent so that the Israelites who had been bitten by snakes could look at it and be healed (Numbers 21:4-9)?

Well, the Israelites took something good and idolized it, thus making it bad. It had to be destroyed.

Listen to what King Hezekiah did:

2 Kings 18:3–4 “And he did what was right in the eyes of the Lord, according to all that David his father had done. He removed the high places and broke the pillars and cut down the Asherah. And he broke in pieces the bronze serpent that Moses had made, for until those days the people of Israel had made offerings to it (it was called Nehushtan).”

The Israelites had taken something that God had given to them, they idolize did, and made it evil.

Now listen to another example found in the New Testament.

1 Corinthians 1:11–15 “For it has been reported to me by Chloe’s people that there is quarreling among you, my brothers. What I mean is that each one of you says, ‘I follow Paul,’ or ‘I follow Apollos,’ or ‘I follow Cephas,’ or ‘I follow Christ.’ Is Christ divided? Was Paul crucified for you? Or were you baptized in the name of Paul? I thank God that I baptized none of you except Crispus and Gaius, so that no one may say that you were baptized in my name.”

Baptism, of course, is a very good thing. It identifies us with Christ. It’s a public declaration of what has already taken place in our heart.

But again, we see in this text that the human heart took something good, idolized it, and made it bad. Paul made it clear that while baptism was not a bad thing, he was so glad that he didn’t baptize any of the Corinthians with what they were making of the ritual.

I think it’s a God-thing that we don’t know for sure where Jesus was crucified and buried. Some would be prone to idolize the locations and make them bad.

So, while the sites I visited today are special because they are the potential sites and they are located in the city of Jerusalem, let’s be content to celebrate the truth found in Scripture and know that it happened – even though we cannot be for sure where they happened.

2 thoughts on “Our Trip to Israel: Golgotha and The Garden Tomb”