So what about all of those “pesky” verses that talk about God’s anger?

We’re hearing that people these days want to believe in a God that is love and … well, pretty much, that’s it. They just want a God that loves them.
But the same Bible that tells us that God loves us also tells us that He is a God of anger and wrath. How can an “angry” God also be a loving God? And is His wrath a necessary component of His character? Can we simply overlook it to make God more “palatable” to the world around us?
Well, I’m glad you asked. First, let’s look briefly at a few verses that plainly state that wrath is a part of who God is. Then let’s look at why a loving God MUST be a God of wrath. Yes, if He is loving, He MUST get angry.
Ephesians 2:3 “We too all previously lived among them in our fleshly desires, carrying out the inclinations of our flesh and thoughts, and by nature we were children under wrath, as the others were also.”
Romans 2:5 “But because of your hardness and unrepentant heart you are storing up wrath for yourself in the day of wrath, when God’s righteous judgment is revealed. “
Romans 5:8-9 “But God proves His own love for us in that while we were still sinners Christ died for us! Much more then, since we have now been declared righteous by His blood, we will be saved through Him from wrath.”
Revelation 6:15-17 “Then the kings of the earth, the nobles, the military commanders, the rich, the powerful, and every slave and free person hid in the caves and among the rocks of the mountains. And they said to the mountains and to the rocks, ‘Fall on us and hide us from the face of the One seated on the throne and from the wrath of the Lamb, because the great day of Their wrath has come! And who is able to stand?'”
Now, to clarify. God’s wrath isn’t like our bouts of anger. When we get angry, it’s usually an emotional reaction. It’s a response to a wrong done against us. It has at least a small desire to exercise some form of revenge upon the one who wronged us. These are just a few of the ugly characteristics that surround our sinful angry moments.
God’s anger isn’t that way at all. It seems that God’s anger is a response that is always directed at sin and sinners. It isn’t an emotional outburst. In fact, it is held at bay by God’s mercy and grace so that it is not always exercised when it would have been appropriate. (I could put some proof texts by many of the the previous statements but will assume that I’m writing to folks who already know and believe what I’m talking about.)
However, the issue is how a loving God can also be a God who is filled with anger/wrath. How can God get angry at sin and sinners and still be loving?
Well, God’s love isn’t just directed at you and me. Sure, “God so loved the world…” He loves the world in general and He loves you and me in particular. Yet, we aren’t the only objects of God’s affection. He loves us … but He also loves holiness and justice. And a love for justice DEMANDS that He get angry. 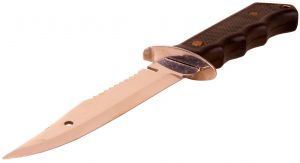 Imagine that you are sitting in a court room. There is a murder trial taking place. A child has been killed and the murderer is sitting in that very courtroom. The child that was killed … was your child. You sit there grieving over your unspeakable loss as you look across the room to see the murder weapon resting peacefully on a table. It is a knife.
As you look at that knife, you are fully cognizant of the fact that it was what the murderer used to plunge into your helpless child’s body. It stole your child’s life from you.
Now, let me ask you a question. As you look at that weapon, would you think: “Hey, I wonder what they’re going to do with that knife after the trial. I wonder if they’ll let me take it home, put it in a nice glass case and put it in a prominent place in my living room.”?
Let me tell you that if you felt this way, I would immediately question your sanity or your love for your child. You simply could not remain so indifferent to the very thing that took something so precious from you.
So, how would you react as you looked upon it? Your pulse would rise. Tears would come into your eyes. You would become angry as you looked at that weapon that was used in such a senseless, painful tragedy, wouldn’t you? You would love to think that the weapon would be destroyed and the sooner the better. That knife took the life of your child and it carries those memories.
You know, it’s the same way with God.
Sin is the weapon that came into God’s creation and destroyed it.
It caused mankind to be cast out of the Garden of Eden to live in a world where difficulty and tragedy would become the norm.
It severed the divine relationship that God enjoyed with mankind.
It also took the life of His own Son on the cross.
As God looks upon sin, He sees what brought such destruction to all that He held dear and He cannot help but become angry. If He never became angry at what caused and still causes such great destruction, we would question His sanity or His love for all of what the Bible says that He holds dear, right?
His love for us DEMANDS that He get angry at what brought such great harm to us. If he could tolerate sin and it never caused His nostrils to flare, could he really say that He loves us and mean it?
This discussion is so much deeper than what I have spoken. Maybe a later post will elaborate a little more.