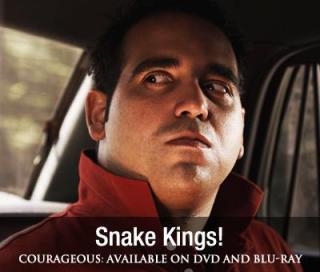 Robert Amaya (“Javier” in the movie COURAGEOUS) came to First Baptist Church of Brooksville, Florida on Saturday, January 14, 2012 for a Fatherhood Conference. It was an incredible event! Here are some of the pictures that were taken.

This picture isn’t the best quality. Yet, it shows the excitement my family experienced as we picked up Robert from the airport. This picture was taken by a family friend in the airport parking garage.

Upon arriving at First Baptist, we enjoyed a great meal provided by John Mitten at the local Chick-fil-A. This meal was provided for the sponsors who gave financially so that the event could be free for the general public.
﻿

While the meal was winding down, Joe Santerelli took the platform to pass out some great doorprizes.
﻿

After the meal, Robert spoke on Courageous Fatherhood. If folks came thinking he was simply going to give a “talk,” they were mistaken. Robert brought an incredible, convicting sermon from God’s Word on what it means to be the father God has called dads to be.
﻿

After the sermon, Robert led men who were willing and able to come to the front to commit to The Resolution.
﻿

Afterwards, we loosened things up a bit with a fun Q&A. I joined Robert on the platform as the moderator. To really loosen things up, I had the media folks play the “Snake King” clip. That’s why Robert and I are laughing in this next picture. It was playing on the screen and everyone in the room was enjoying it.
﻿

As the night came to an end, Robert got a thunderous applause. He spent time with each person that wanted to chat, get an autograph or have a picture with the “Snake King.”
﻿

Before Robert headed back to his hotel room, he posed with my boys. Of course, they wanted to do the “Snake King.”

It was an incredible evening that my family will not forget. I’m so glad that God is using Robert to call men to Courageous Fatherhood and that First Baptist Church got to play a part in it.