On our recent trip to Israel, we were blessed to have a very competent Jewish guide. She was able to give us a perspective on the Holy Land that was from someone who grew up in the Jewish culture. Her words and perspective were therefore very intriguing.

However, she was not a follower-of-Jesus. She knew much about the Bible but periodically demonstrated that she did not understand the larger story that runs throughout God’s Word. So, the individual stories in Scripture were often not seen in their larger context. I enjoyed listening to what she had to say but I had to also spend time reflecting on why she was saying what she was saying.

There is one comment she made that I don’t think I will ever forget. It wasn’t an emotional moment. Not much attention was drawn to it. But, what she said (and the fact that she was a Jew) made a lasting impact on me.

Our guide said something like: “Pope Francis met with Jewish leaders last year to affirm that the Jews weren’t guilty of killing Jesus.”

On its face, our guide’s words didn’t seem too profound (although the Pope’s assurances were biblically inaccurate). Yet, I understood where she was coming from. For a large part of the past 2,000 years, the Jews have been horribly mistreated.

They have been ostracized.

They have been persecuted.

They have been tortured.

They have been killed.

And it is so unfathomable that this evil has often been justified by people who blame the Jews for killing Jesus. Therefore, those wicked minds have reasoned that the Jews are cursed by God and can be mistreated by the rest of humanity.

Anyone who is a legitimate Christian can see the evil of such reasoning.

Jesus, even as He was being crucified on the cross, looked down at His executioners and said, “… ‘Father, forgive them, for they don’t know what they are doing.’ …” (Luke 23:34). As followers of Jesus, we are to extend the same love and forgiveness that He extended. Personal mistreatment of others, regardless of what they have done, is never justified.

But, the question is a legitimate one and demands an answer: “Who is responsible for killing Jesus?”

For the Christian, our ultimate authority is the Bible so let’s look there to see who is responsible for Jesus’ death. But, let me warn you, the last two culprits may surprise you.

Acts 1:16 (ESV) “Brothers, the Scripture had to be fulfilled, which the Holy Spirit spoke beforehand by the mouth of David concerning Judas, who became a guide to those who arrested Jesus.”

Further, Jesus said that because of what Judas did, it would have been better if he had never been born.

Matthew 26:23–24 (ESV) “He answered, ‘He who has dipped his hand in the dish with me will betray me. The Son of Man goes as it is written of him, but woe to that man by whom the Son of Man is betrayed! It would have been better for that man if he had not been born.'”

Regardless of whoever else was involved, it was Judas that set the wheels in motion. It was his kiss on Jesus’ cheek (Luke 22:47-48) that started the process that ended with Jesus being placed on the cross.

So, Judas was responsible for Jesus’ death.

Matthew 27:27–37 (ESV) “Then the soldiers of the governor took Jesus into the governor’s headquarters, and they gathered the whole battalion before him. And they stripped him and put a scarlet robe on him, and twisting together a crown of thorns, they put it on his head and put a reed in his right hand. And kneeling before him, they mocked him, saying, ‘Hail, King of the Jews!’ And they spit on him and took the reed and struck him on the head. And when they had mocked him, they stripped him of the robe and put his own clothes on him and led him away to crucify him.
As they went out, they found a man of Cyrene, Simon by name. They compelled this man to carry his cross. And when they came to a place called Golgotha (which means Place of a Skull), they offered him wine to drink, mixed with gall, but when he tasted it, he would not drink it. And when they had crucified him, they divided his garments among them by casting lots. Then they sat down and kept watch over him there. And over his head they put the charge against him, which read, ‘This is Jesus, the King of the Jews.'”

Clearly, Pilate was guilty because he stepped aside and let the crucifixion of Jesus take place. It is also clear that the Roman soldiers were guilty because of what is mentioned in the previous verses.

So, the Romans were responsible for Jesus’ death.

Matthew 26:3–4 (ESV) “Then the chief priests and the elders of the people gathered in the palace of the high priest, whose name was Caiaphas, and plotted together in order to arrest Jesus by stealth and kill him.”

There is no ambiguity in the above verses. The Jewish, religious leaders “plotted together in order to arrest Jesus by stealth and kill him.”

So, the Jewish leaders were responsible for Jesus’ death.

Listen to the Apostle Peter’s words as he preached on the Day of Pentecost.

Acts 2:22–23 (ESV) “Men of Israel, hear these words: Jesus of Nazareth, a man attested to you by God with mighty works and wonders and signs that God did through him in your midst, as you yourselves know — this Jesus, delivered up according to the definite plan and foreknowledge of God, you crucified and killed by the hands of lawless men.”

Acts 2:36 (ESV) “Let all the house of Israel therefore know for certain that God has made him both Lord and Christ, this Jesus whom you crucified.”

It is clear who the Apostle Peter believed was responsible for the crucifixion of Jesus. He was speaking to massive crowds of Jewish people who had come to Jerusalem. He put the blame upon them.

So, the Jews were responsible for Jesus’ death.

Now, these next two may take come as a surprise … but the Scriptures makes it clear that God the Father and God the Son were responsible.

Acts 2:22–23 (ESV) “Men of Israel, hear these words: Jesus of Nazareth, a man attested to you by God with mighty works and wonders and signs that God did through him in your midst, as you yourselves know — this Jesus, delivered up according to the definite plan and foreknowledge of God, you crucified and killed by the hands of lawless men.”

Romans 8:31–32 (ESV) “What then shall we say to these things? If God is for us, who can be against us? He who did not spare his own Son but gave him up for us all, how will he not also with him graciously give us all things?”

Isaiah 53:4 (ESV) “Surely he has borne our griefs and carried our sorrows; yet we esteemed him stricken, smitten by God, and afflicted.“

Clearly, we understand that God was responsible for Jesus’ death.

As God who took on the form of a man (John 1:1, 14), Jesus made it crystal clear that He was ultimately responsible for His death.

Jesus was emphatic that Judas, the Jewish leaders, the Jews, and the Romans couldn’t take His life unless He willed to lay it down.

So, Jesus claimed full responsibility for His death.

What does this all mean?

First, it means that even though there were individuals and people groups who worked to put Jesus on the cross, they were only able to do what they did because it was God’s will to do it.

Second, God willed that Jesus was put on the cross because there was a serious problem. Each of us has broken God’s laws and God (who is just and holy) cannot overlook sin. It demands judgment.

Romans 5:8 (ESV) “but God shows his love for us in that while we were still sinners, Christ died for us.”

In fact, as we put our trust in Jesus, there is a trade that takes place:

Followers of Jesus aren’t simply forgiven. We are credited with the perfect holiness of the sinless Jesus.

2 Corinthians 5:21 (ESV) “For our sake he (God) made him (Jesus) to be sin who knew no sin, so that in him (Jesus) we might become the righteousness of God.”

But, this wasn’t possible unless Jesus died on the cross. Our sins demanded punishment. They ultimately deserved death (eternal separation from God in Hell). But, when we trust in Jesus and let Him take the punishment that we deserve, we enter into relationship with God. In fact, the life of the Eternal One, in the person of the Holy Spirit, comes to reside inside of us.

Romans 6:23 (ESV) “For the wages of sin is death, but the free gift of God is eternal life in Christ Jesus our Lord.”

So, while there were many who played a part in putting Jesus on the cross, they only accomplished what God desired to do. And God did that so that Jesus could be our substitute, the One who would take our punishment so that we can enter into a soul-satisfying relationship today and forever with the God of all Creation.

Oh, one more thing – Jesus didn’t stay dead. The tomb is empty! I was there a couple of weeks ago. There’s nothing inside!

Matthew 28:5–7 (ESV) “But the angel said to the women, ‘Do not be afraid, for I know that you seek Jesus who was crucified. He is not here, for he has risen, as he said. Come, see the place where he lay. Then go quickly and tell his disciples that he has risen from the dead, and behold, he is going before you to Galilee; there you will see him. See, I have told you.'” 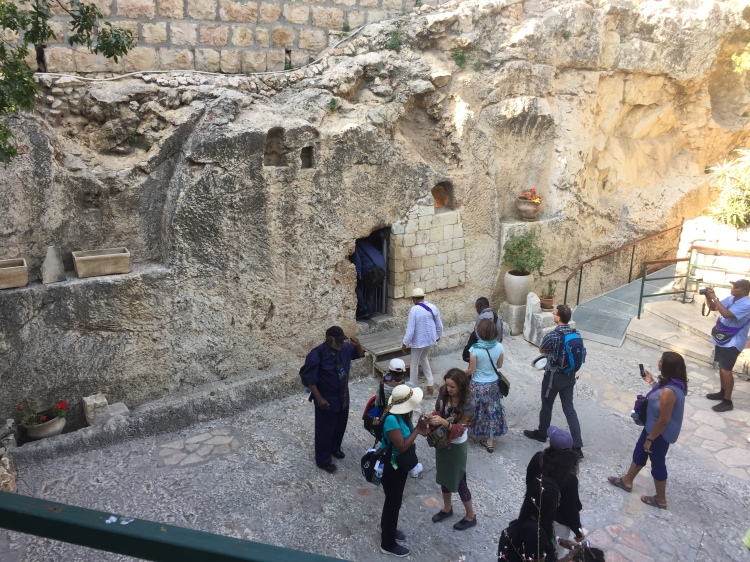 4 thoughts on “Who Was Responsible for Jesus’ Death?”