When we think of the nativity story as recounted in Scripture, our hearts warm. That’s because we weren’t there when it happened.

A mom was visibly pregnant who claimed that she was still a virgin. Submitting to God’s will for her life had put her in a very unenviable position among her peers who would have held her in contempt for adultery.

The timing of Herod’s census could not have happened at a worse time as Joseph and Mary made their way on the 90 mile trek from Nazareth to Bethlehem (either walking or on a beast of burden) without the luxuries of cushioned seats and great shocks. I can only imagine this trip would have been miserable for Mary.

When they arrived, they couldn’t find a place to stay so she gave birth in a stable or cave and she placed her newborn into a feeding trough. No mom I know would have ever allowed such a thing if they could have helped it.

Their encounter with Bethlehem wasn’t something that warmed their hearts. It may have been a horrible memory that they accepted from God’s hand but were ready to get it behind them.

So, that’s what Bethlehem was like 2,000 years ago. While it was so much different than we think of it, we are so glad that God brought His Son into the world to save us from our sins.

What is it like now? Almost certainly, it is also much different than we think.

First, here is a portion of the bus ride on our way to Bethlehem from Jerusalem. Notice that our bus driver shows us some red signs that make it clear that Jews are not allowed into the West Bank where Bethlehem is located. Entering the region could be fatal. However, our bus driver also told us that Jewish bus drivers and tour guides were tolerated because they were bringing tourists with money.

Muslims have claimed various cities and regions in Israel. Jews have claimed other sections. Christians are the persecuted minority.

As we were nearing Bethlehem on our bus ride, we passed a mosque where Muslims were engaged in their worship. These men were outside (I suspect) because the inside of the facility was filled. 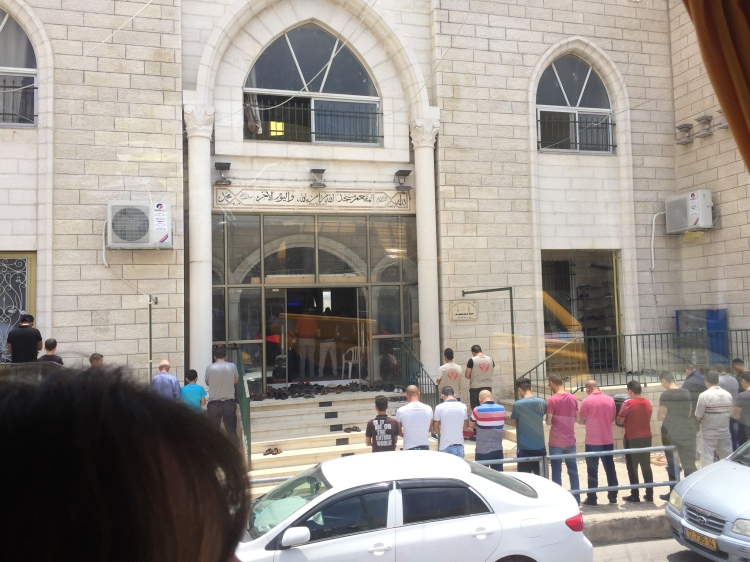 After eating lunch, we visited the site that is generally believed to be the place where the shepherds were probably watching their flock 2,000 years ago. We also entered a cave that they might have used to get out of the weather. 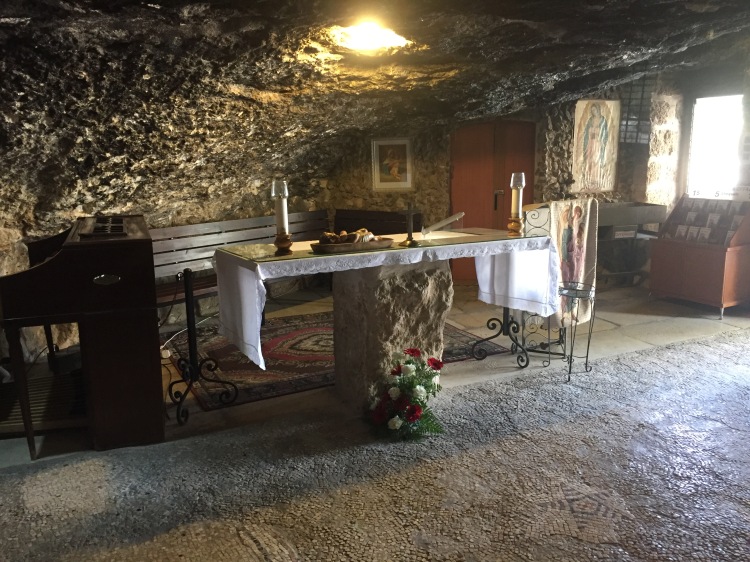 After we exited the cave, Kim and I took a picture with Bethlehem behind us and the cave a few yards in front of us. 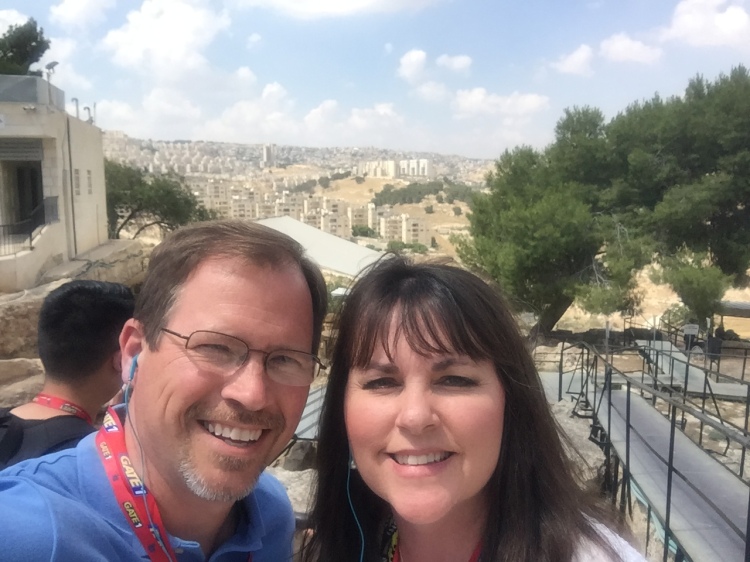 We took the bus ride into the city. To realize just how commercialized this city has become, I took a brief video of the bus depot.

Bethlehem is a city that has also become a location of many restaurants that we all know and enjoy. Kentucky Fried Chicken is here. But, someone said that KFC stands for “Kentucky Fried Camel.” 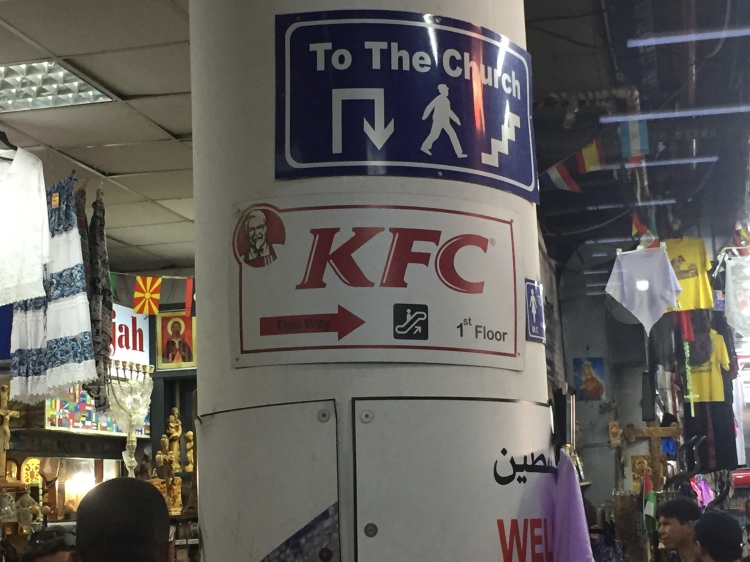 And if you can’t get a Starbucks in Bethlehem, you can get coffee at …

In a city that is virtually all Muslim, the language on this sign is distinctly Christian. This, too, shows that the city is geared toward tourists.

We visited the Church of the Nativity in Bethlehem. It is a building that is, if I remember correctly, shared by Roman Catholics, Greek Orthodox, and Armenians. This massive structure is built on the site of a bunch of caves, one of which might have been the one where Mary gave birth to Jesus.

Our entrance into the building required that we duck into the small entrance. Some suspected that this was because it made it impossible for Crusaders to enter on their horses. Others said it might have been to demonstrate humility as one entered so “sacred” a location.

Once inside the building, we had to descend a set of stairs to get to the place where some thought Mary may have given birth to Jesus. 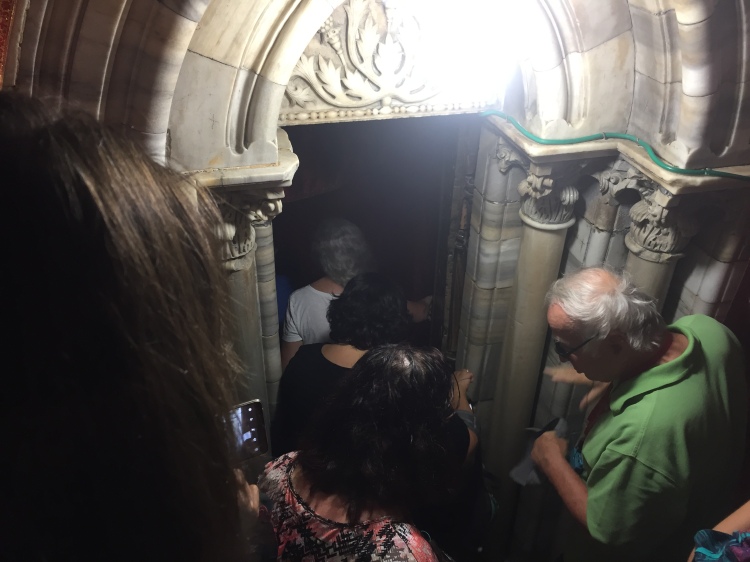 … and this is what the location looks like. I wasn’t impressed or convinced. I would rather an archaeologist tell me where he/she thinks Jesus may have been born than some religious leader who simply claims a spot and settles the matter.

There were many candles that were aflame in this church. But, it looked like college guys had decorated the place. I know some ladies who could have really dressed this place up.

After exiting the church, we walked down a street in Bethlehem to get back to the bus depot. It’s not “oh, little town of Bethlehem, how still we see thee lie.”

And I’ll end with a couple of videos to show what Bethlehem looks like now.