Coming to this conclusion is a very good thing! Why? Because, first of all, it means we’re paying attention to what we are reading. Second, it means the Holy Spirit is reminding of us of relevant passages to what we have just read. Third, it may cause us to dig deeper, and in so doing, cause our knowledge of God’s Word to become more complete and coherent.
Two passages that would seem to contradict each other are:

Matthew 5:42 “Give to the one who begs from you, and do not refuse the one who would borrow from you.”

2 Thessalonians 3:10 “For even when we were with you, we would give you this command: If anyone is not willing to work, let him not eat.”

The obvious problem arises when someone who isn’t willing to work decides to beg and you are the object of their attention. Are you, therefore, obligated to obey Matthew 5:42 and thus break 2 Thessalonians 3:10?
Let’s spend some time investigating these verses to see how they work together.
First, 2 Thessalonians 3:10 is clear cut. There is no ambiguity. God, through the Apostle Paul, is making it clear that if someone is able to work and has opportunities to work to provide for their family, then they had better do it.
The context was a misinformed understanding of end times events. Paul have previously told the church at Thessalonica that Jesus was coming back and they needed to be ready (see 1 Thessalonians 4:13-5:11). Apparently, some of them thought he was coming back within the week! So, Paul wrote them again and told them that there were things that needed to happen before Jesus came back (see 2 Thessalonians 2:1-12). Further, Paul had to rebuke them and tell them to get back to work (2 Thessalonians 3:10-12). Apparently, some got so excited about Jesus’ return that they quit their jobs and were relying upon others to take care of them.
It is in this context that God, through Paul, told them and us that if we are able to work and there are opportunities to work to provide for our families, we’d better do it.
How serious is it if we can provide for ourselves and our family but don’t?

1 Timothy 5:8 “But if anyone does not provide for his relatives, and especially for members of his household, he has denied the faith and is worse than an unbeliever.”

Did you get that? Someone who can work but doesn’t is worse than someone who will spend eternity in Hell. Serious stuff!
God loves a good work ethic. He loves it when we provide for those under our care. And He despises it when we don’t take that responsibility seriously.
Enter Matthew 5:42…
So, what if someone comes to you and begs? What if they ask for money, you’ve got it to give and you want to comply with Scripture – which includes the command of Matthew 5:42. What are you to do?
Well, let’s look at the context of Matthew 5:42. Because, a text without a context is only a pretext. 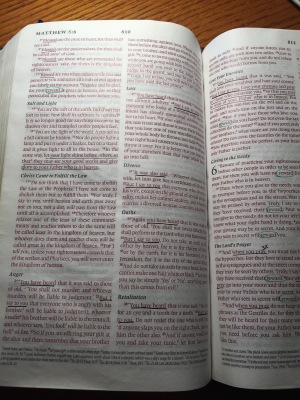 When I turn to my Bible in Matthew 5, I notice that I’ve previously underlined some things. Specifically, I have underlined, “You have heard,” and “But I say.” Those words appear in Matthew 5:21-22, 27-28, 31-32, 33-34, 38-39, 43-44.
It is clear what Jesus is doing – He is telling them what they have previously believed is wrong. So, He elaborates and tells them what the true intent of the law was. They had made it superficial, limited only to behaviors. Jesus said that it was internal, focused upon the attitude of our hearts.
But – and get this point – a heart attitude does not always necessitate a corresponding action. (Got your interest? Keep reading.)
When we wonder what it looks like to live out our life of faith, we simply need to look to Jesus. He ultimately came to pay the sin debt of all who would believe but He also lived for about 33 years so that we could observe His life and strive to live like Him. (This is the essence of Christlikeness.)
So, did Jesus always give to those who asked?
Well, when we look at the mob who came for Him in the Garden of Gethesemane, when we look at the mock trial led by the Sanhedrin, and when we look to the cross, we see clearly that the Jewish leaders had no right to claim His life. Yet, when we read the story, we see that Jesus quietly let it happen. They were asking for His life and He gave it.
So, in this instance, Jesus certainly complied with the spirit of Matthew 5:42. There were those who were “begging” for His life and He didn’t refuse them.
Yet, there were other times when people asked things of Jesus that He refused to give. Just one instance is found in Mark 1. Listen to what happened the night before He denied a request.

Mark 1:32-34 “That evening at sundown they brought to him all who were sick or oppressed by demons. And the whole city was gathered together at the door. And he healed many who were sick with various diseases, and cast out many demons. And he would not permit the demons to speak, because they knew him.”

The knowledge of Jesus’ miracle-working power was widespread. People were coming from everywhere to be healed. They “begged” and Jesus didn’t refuse them (see Matthew 5:42).
He may have stayed up well into the night healing people. But, the morning hours found Him out in a private place, away from all of the commotion of the previous day, communing with His Heavenly Father (Mark 1:35).
But, apparently, news continued to spread and people began gathering at Peter’s house early that morning, too. So, what was Peter to do? He went out looking for Jesus! Listen to what Scripture says:

Mark 1:36-37 “And Simon and those who were with him searched for him, and they found him and said to him, ‘Everyone is looking for you.'”

In other words, “There are more people who want to be healed, Jesus. Can you hurry up with your prayer time so you can come back and grant the people’s requests?”
What do you think Jesus said? Did He say, “Well, they are asking so I have to do what they say. I can’t say ‘no’.”? Knowing of the truth of Matthew 5:42, did He feel compelled to bind Himself to the people’s requests? Nope.

In other words, “There are many other people that have physical needs, too. But, even more importantly than that, people have spiritual needs. If I stay and grant the endless requests to meet the physical needs, I won’t be able to help more people with their spiritual needs.”
So, the requests of the people in Capernaum went unanswered.
On it’s face, this would seem to be a violation of Matthew 5:42 unless we realize that Jesus’ words deal primarily with the heart and only secondarily the actions.
It is my understanding of Matthew 5:42 that we are commanded to have a heart that is always ready and willing to give to whoever asks and not refuse those who desire to borrow from us. And, this heart attitude should often evidence itself in the action of giving to those who beg and not refusing those who desire to borrow from us.
Yet, we are not compelled in every situation to do so. Our love (the greatest command) for others means that we will desire to do what is in their best interest. If they are hungry, get them something to eat. If they are thirsty, give them something to drink. If they are behind in their rent, you may want to help them catch up if you are able.
But, love also means that we will not do things that will work to harm those we help. If we believe that in helping someone, that we are empowering them to continue in laziness and thus run headlong into 1 Timothy 5:8 where God says that they are worse than people on their way to Hell, why in the world would we do that?!
So, always, always, always, be willing to help others. Our Lord has even shown us that we are to be prepared to sacrifice for the benefit of others (He did that on the cross). But, there will be times when we are complying with Matthew 5:42 and maintaining a heart that is ready to help others … and yet believe that a request for help should be denied.
Friend, this is why God has given us the Holy Spirit. We need His Word to inform our minds. But, we also need the Holy Spirit to guide our steps as we live out our lives and seek to comply with God’s Word.
Being filled with the Holy Spirit isn’t a suggestion (Ephesians 5:18). It is an absolute necessity!