When you were a child and you fell down and scraped your knee, who did you run to? Your dad? Fat chance! You ran to your mom, didn’t you?

Moms around the world tend to be nurturers and are great empathizers. Dads, on the other hand, tend to toughen us up. They may have said something like: “Stop your crying and get over it. You’re going to be OK.”

While Jesus related to His disciples in various ways throughout His ministry, most certainly He acted like their dad in Luke 8;22-25. He wanted to toughen the up. Let’s look at the text and draw out another principle that will help us get through the tough times.

Luke 8:22-25 (CSB) “One day he and his disciples got into a boat, and he told them, ‘Let’s cross over to the other side of the lake.’ So they set out, and as they were sailing he fell asleep. Then a fierce windstorm came down on the lake; they were being swamped and were in danger. They came and woke him up, saying, ‘Master, Master, we’re going to die!’ Then he got up and rebuked the wind and the raging waves. So they ceased, and there was a calm. He said to them, ‘Where is your faith?’ They were fearful and amazed, asking one another, ‘Who then is this? He commands even the winds and the waves, and they obey him!’ “

We saw in our last post that Jesus intentionally sent these disciples on this terrifying trip … on purpose. He knew that they would fear for their lives like never before but He did it anyway. Could it be that He sent them on this journey to toughen the up?

The storm was so bad that these seasoned fishermen became terrified. Some of these men had probably been fishermen their whole life. (In Matthew 4:21, it states that James and John were in a boat mending their nets with their father when Jesus called them to follow Him.

Not only did they know how to handle a boat – they may have believed that they had the home court advantage the moment they stepped into one. When they were on land, they were content to let Jesus take charge.

But in a boat … well, that was quite another matter. They were perfectly content to let Jesus take a seat in the back of the boat and go to sleep. They would take over from there. If any trouble arose, they’d be able to handle it. They couldn’t imagine a scenario on the sea in which they would acknowledge their deficiencies with fear in their eyes and plead with Jesus for help (“Master, Master! We are going to die!”).

They would have died before acknowledging their fear to someone who didn’t have any skills in handling a boat on the water … which gives us a clue as to how bad the storm must have been.

We can’t fault them for being terrified, can we? It made perfect sense that they were scared. A massive storm had taken them by surprise when they were far from land. Lightening was flashing around them. The thunder was deafening. Rain blinded them. The waves treated the boat like it was a piece of driftwood and threatened to capsize it. Those waves also crashed over the boat and threatened to swamp it.

All of this happened while these men did everything they had been trained to do. Everything they tried in order to maneuver the boat and get it to shore failed miserably. They went from confidence to concern to sheer terror.

No one in his right mind would have faulted them for their fear. It made perfect sense. Everyone of us would have assured them that fear was appropriate in this circumstance … except Jesus.

Jesus rebuked them. And notice at what point He corrected them. It was after He calmed the storm. He looked each of them in the eye and said, “Where is your faith?” It was as if He was saying, “Toughen up! If your hearts had remained calm, I wouldn’t have had to calm the storm.”

Now, if I had been one of those disciples, I may have been tempted to justify my fear. “But Jesus, You were asleep and didn’t see how bad it was. We had been fighting with the storm for hours. It was like none we had ever experienced. Some of us are skilled fisherman and know all of the tricks of the trade for handling a boat in any circumstance. Yet, none of it worked. We were nearing death, Jesus. Ordinarily we would have trusted You, Jesus, but this storm was the worst thing we’ve ever experienced. Our fear was justified … wasn’t it?”

That argument didn’t fly with a father-figure who desired to build toughness into his followers. They got scared when they should have been calm.

But that brings up a question: “What is the foundation for toughness in Christ-followers? What could have enabled these men to remain fearless in a hurricane of a storm? What can help us to get through the tough times of life?” Faith!

Knowing that they were in God’s will and knowing that God was in that situation with them (even when He seemed to be asleep and completely unaware of the ordeal) would have been more than enough to give them the confidence to weather the storm. If their hearts had been tough and calm, the storm could have continued to rage around them. And Jesus would have awoken with a smile as He looked upon these men who had evidenced such manly, godly character. 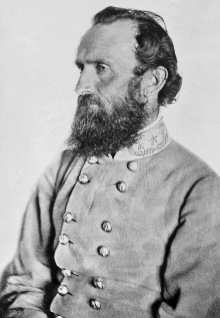 As I conclude, I want to leave you with one of my favorite quotes of all time. Thomas Jonathan (“Stonewall”) Jackson was a devout Christian who loved the Lord. His life had been tough from birth and he had learned to find strength from the Lord to make it through those tough times. He learned that as long as he was in God’s will and he was assured that God was with him, he had nothing to fear. The Almighty would watch over him as he trusted in Him.

Someone asked him on a battlefield how he could remain so serene while the bullets and cannonballs were piercing the air all around him. In the book, “God’s and Generals,” Jeffrey Shaara allowed Stonewall to provide the following answer (probably something Stonewall could have actually said):

“My religious belief teaches me to feel as safe in battle as in bed. God has fixed the time for my death. I do not concern myself with that but to be always ready whenever it may overtake me. That is the way all men should live … then all men would be equally brave.”

Because of his steadfast faith in his Lord, Stonewall sounds like a man who may not have panicked with the disciples in the boat.

What about you? Do you have some toughening up that needs to happen? It will come only when Jesus sends you into some storms … but you’ve got to trust Him through it. That’s the only way you’ll learn this lesson.