At the risk of seeming self-promoting, I want to record a very special memory that my journal highlighted this morning.

Thirty-five years ago, on January 7, 1984, I got to be in a very special band that performed at Sterling High School in Baytown, Texas.

I was an 8th Grader at the time and was in my third year of band. The baritone was my instrument of choice (looks like a small tuba but has the tone of a trombone) and I loved it! Not only did it allow me the opportunity to build up my muscles as I walked the mile home and then to school each day with that heavy instrument in tow, it was also something I could focus on and excel at. Competitions were entered in my middle school years. Sometimes I did well and other times, not so well. But I was intent on getting better.

Then came the day of competition. Hundreds and hundreds of students competed against each other for the envied seats in the two bands. All of the middle school bands in the Houston metro area were divided into two regions – North Houston and South Houston. Two All-Region Bands would be created out of the top students in each instrument and a concert would be performed on January 7, 1984. Further, Hallmark would show up to make a recording of the performance.

Well, I made fourth chair baritone for the North Houston All-Region Band. Dr. Robert Linder, who was the conductor for Houston’s Symphony Under the Stars would conduct our band.

As they say, the rest is history. I wouldn’t give anything for the feeling of being on that stage and performing with those students under such a competent conductor. 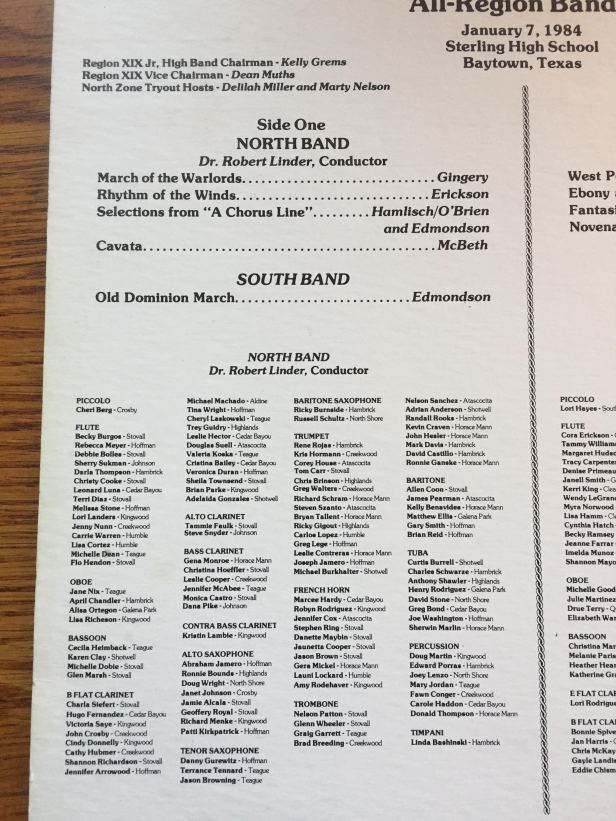 On August 12, 2017, I sent a Facebook message to Dr. Robert Linder upon Ms. Dempsey’s (my middle school band teacher) prompting. Here is what I wrote:

My former middle teacher, Ms. Claudia Dempsey, recently chatted with me (via Facebook) about my son leaving for college. She was such a powerful force for good in my life when I was in middle school.

When I reminded her that I was in the North Houston All-Region Band (1984) and you conducted it, she told me to hop on over to your site and drop a note.

I justed wanted to say how much it meant to be a part of that band. Your presence made it immediately clear that our practices and performance weren’t going to be half-baked. Even though the guys and gals in that room were ‘the cream of the crop,’ you were able to help us perform in a way that went beyond what middle-schoolers should be capable of doing. I’ve still got the Hallmark recording and your signature on the program of that night’s performance. Thank you!

On December 31, 2017, Dr. Linder sent the following Facebook message to me:

Somehow I did not get this message when you first sent it .

It is now New Year’s Eve looking at 2018. Thank you so much for your kind words. Music is such a special language and I am glad that I was able to add to your love and appreciation of making music. We conductors try to be good shepherds for our sheep as the baton makes no noise. What we get from our musicians is what we try and give to them. Together we are a wonderful creative force — at any age. Thanks to you for being part of that force.

Ours is a special privilege,

All of our lives are filled with precious memories. I just wonder if one of the many activities of Heaven will be to periodically reflect on them and praise the God who graciously made them possible.